To visit this site you must be of legal age to purchase and consume alcohol,
if there is no legislation in your country,
you must be at least 18 years of age,
and by clicking on the enter button,
I accept the terms of use, and the privacy policy.

ALCOHOL ABUSE IS DANGEROUS FOR YOUR HEALTH,
TO BE CONSUMED IN MODERATION.

Cognac know-hows were developed over several centuries. It all started with distillation, introduced in the 15th century by the Dutch, this technique enabled Charente’s wine to preserve its quality during transportation. Three centuries later, stills were modified and double distillation appeared. The eaux-de-vie were improved thanks to ageing in oak casks. 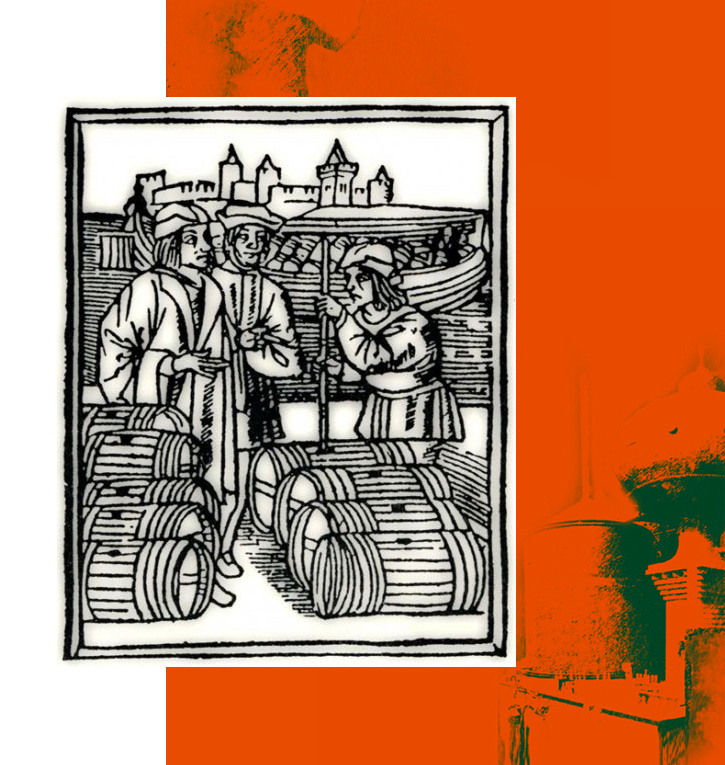 The  Cognac markets expanded in the 19th century and big Cognac merchants were born. Eaux-de-vie were no longer shipped in casks, but in glass bottles. Today, Cognac is exported to near 160 countires. Discover the Cognac historical timeline.

The vineyards of Poitou produced wines that were appreciated in countries bordering the North Sea. They were transported on on Dutch ships, which had come seeking the salt from the coast.
As early as the Middle Ages, the Charente River gave birth to a mentality favouring international trade. 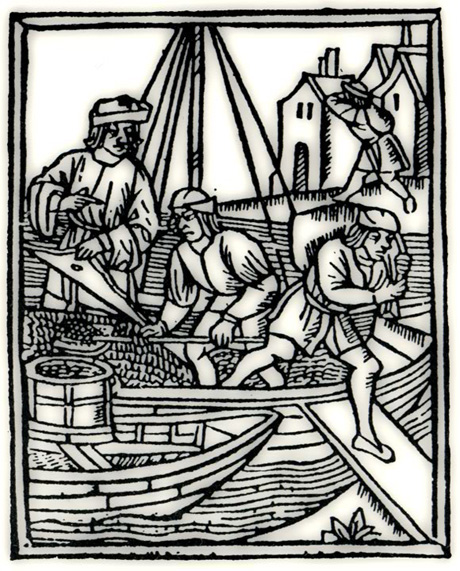 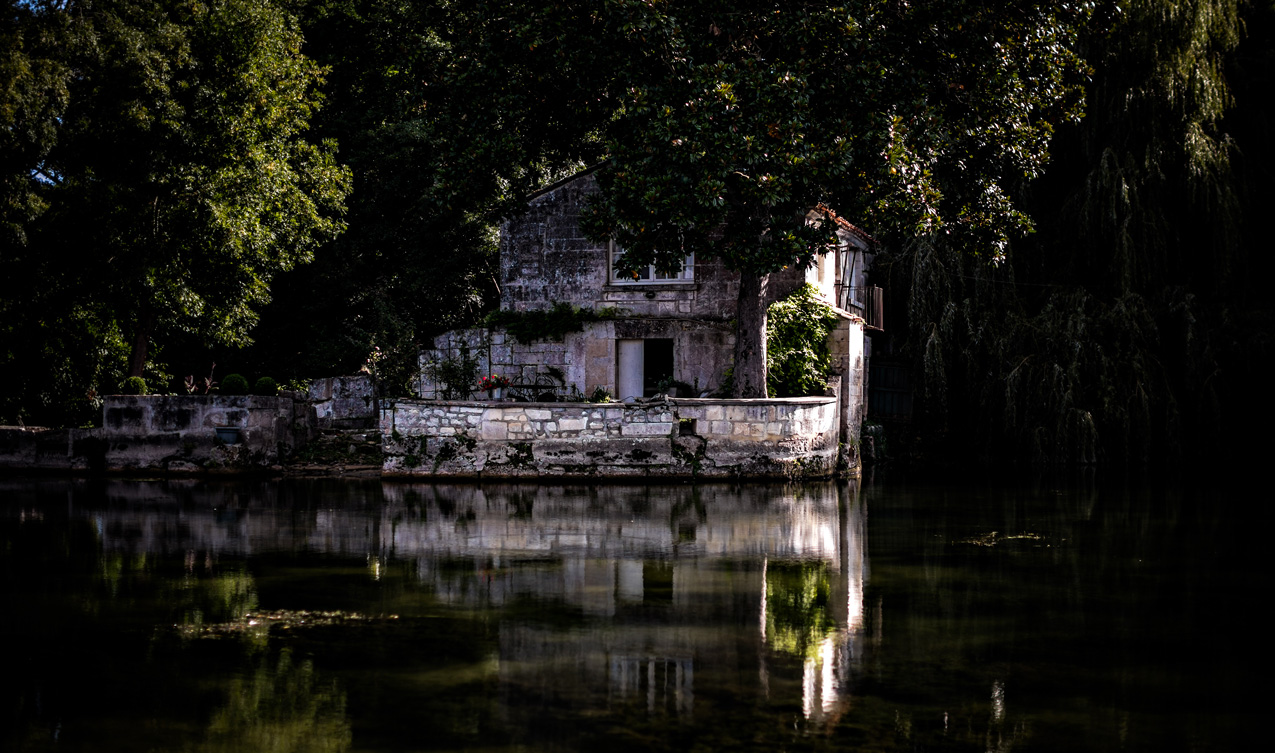 Indeed, this navigable river was nicknamed the “walking Path” by the Romans, for it provided coastal ships easy access to the heart of the Poitou-Charentes. From this period on, vineyards spread progressively deeper into the country, to the Saintonge and Angoumois regions.

The city of Cognac was already distinguishing itself for its wine trade, in addition to its salt storage activities dating back to the 11th century. 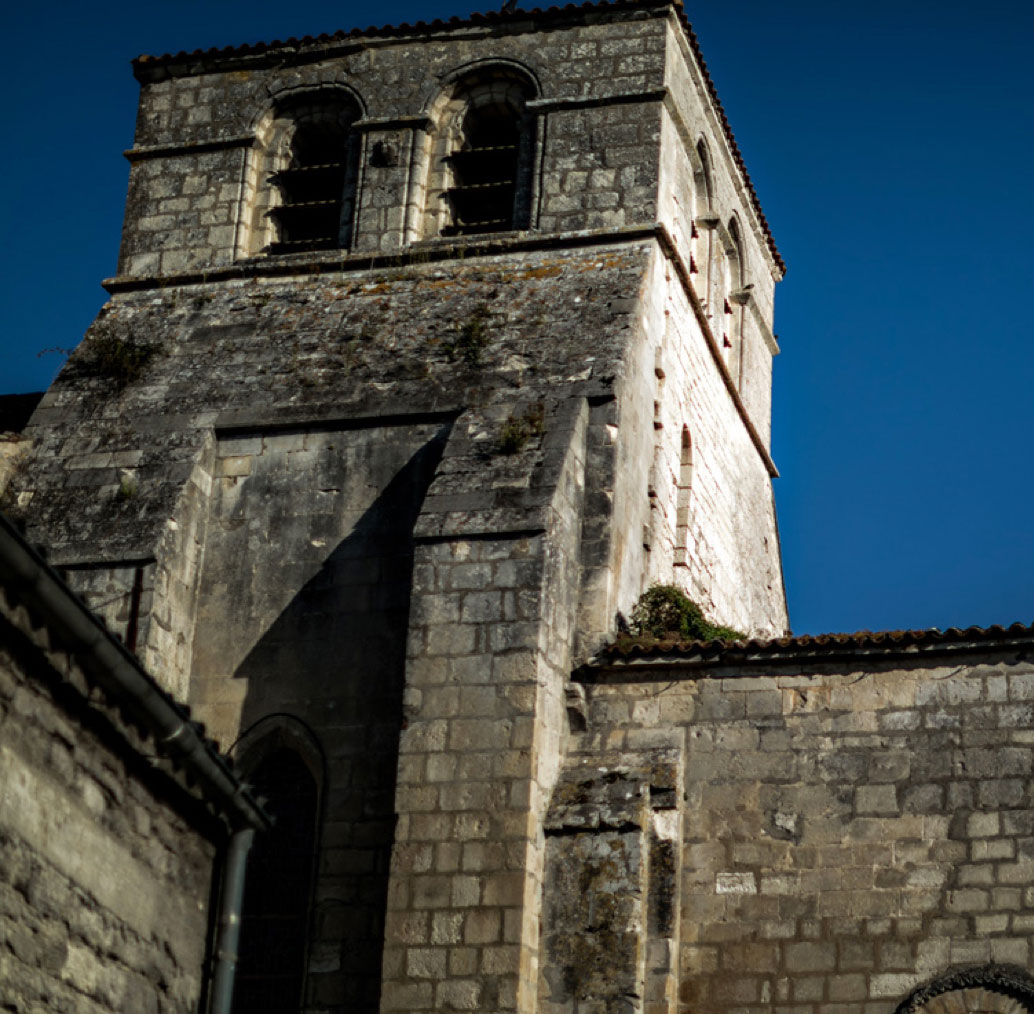 During the Renaissance, commerce experienced a significant boom.
People began to travel longer distances and more frequently.
The Dutch, very active traders who were called upon by Henri IV to help drain the Marais Poitevin (The marshlands of the Poitou region), were fond of the region’s goods:
salt, Angoulême paper and Cognac wines. 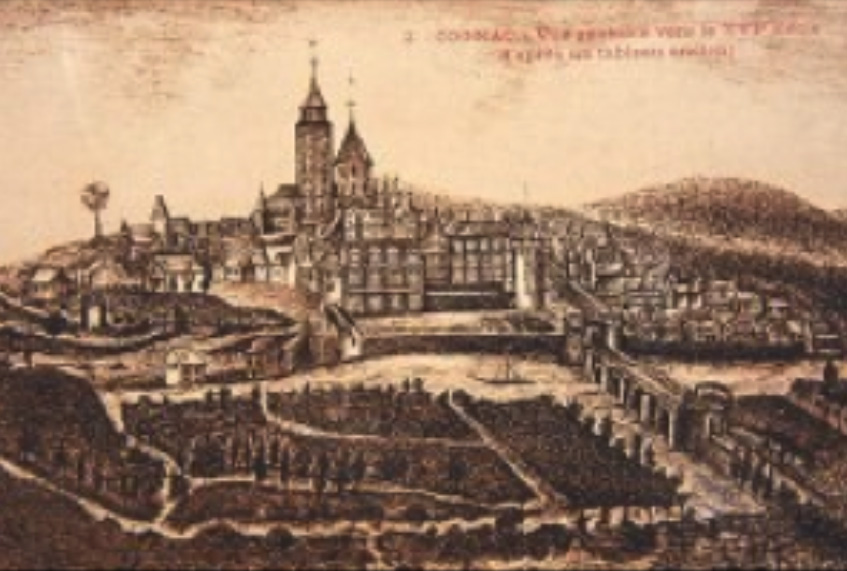 Indeed, the Dutch vessels would come to Cognac and the ports of the Charente in search of the famous wines from the “Champagne” and the “Broderies”.

The result was a success. They named it “brandwijn”— burnt wine which would become “brandy”, a spirit made from wine. They drank it mixed with water.

Later, the Dutch decided it was more economical to have the wine distilled where it was produced, reducing the volume to transport. It was then that they installed the first distilleries in the region. They required the stills be made out of copper from Amsterdam. This was one of the first technology transfers in history. 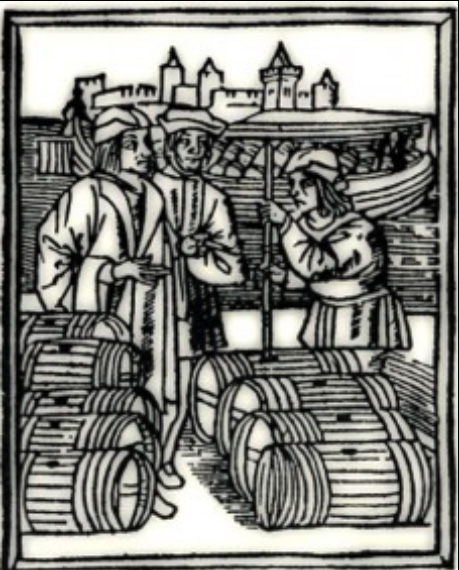 At the beginning of the 17th century, double distillation makes its appearance in the region, which will enable the product to travel as a stable spirit, much more concentrated than the “brandwijn.”
The first stills, installed in the Charente by the Dutch, would be progressively modified; the French gradually mastered and improved the technique. 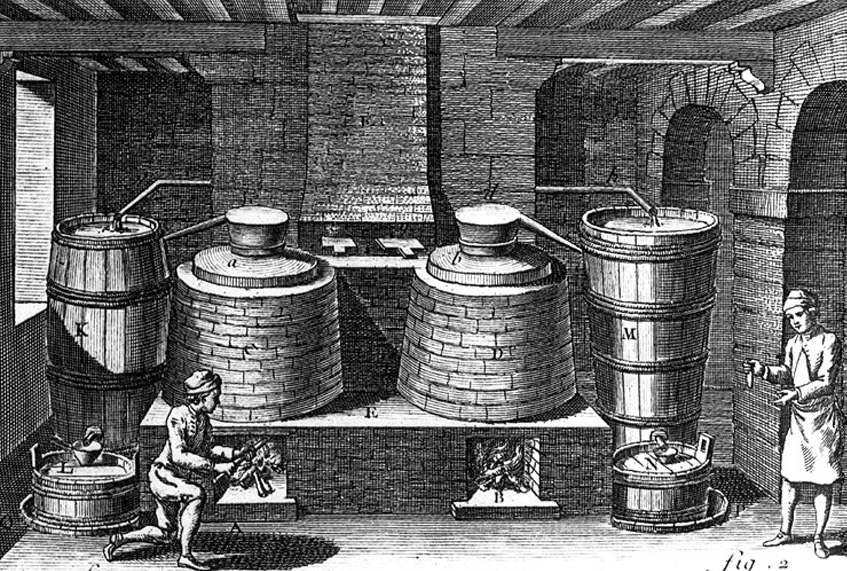 Until the beginning of the 17th century, distillation consisted of only one heating, which obtained the ”brouillis,” a liquid drunk mixed with aromatic herbs.

Legend has it that double distillation was invented by the Chevalier de la Croix Maron, Lord of Segonzac, a pious man who dreamt that Satan was trying to damn his soul. In his dream, he saw himself in the Devil’s cauldron, but his faith was so deeply anchored in his soul that it resisted the first “cooking”. To achieve his ends, the Devil was forced to “cook” it again.

When he woke up, the Chevalier had the idea of extracting the “soul” of eau-devie with a second distillation.

This is how the legend on the origin of the discovery of double distillation for Cognac eaux-de-vie was perpetuated in the region.

Delays in loading the boats, resulted in the discovery that the spirit improved with age in oak casks made from wood from the neighbouring Limousin forest and that it could be drunk straight. The first Cognac house was established in 1643 : Augier.

Diderot, the great Enlightenment philosopher, mentions Cognac in his famous Encyclopedia as “renowned for its brandies ”. 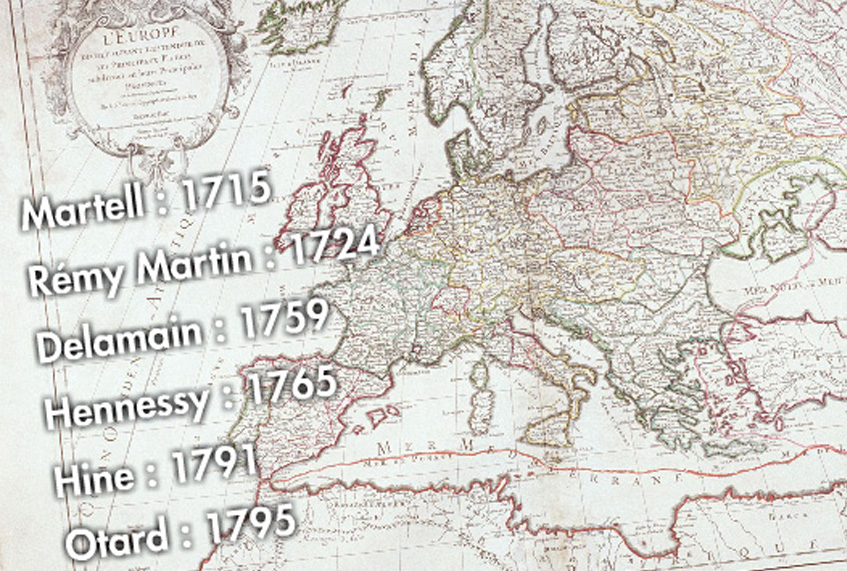 Starting at the end of the 17th century and more markedly during the next century, the market began to take shape and Cognac companies were created in the main cities of the region. These merchants, mostly from the British Isles, collected eaux-de-vie from local growers and sent them off to the countries of Northern Europe (Martell 1715, Rémy Martin 1724, Delamain 1759, Hine 1763, Hennessy1765, Otard 1795…).

In the 19th century, France witnessed seven political regimes and two revolutions, leaving the country with a certain sense of instability.
Periods of economic liberalism alternated with periods of protectionism.

At the time, France was drawing its resources from its colonial conquests, which pushed back the first industrial revolution in France until after Napoleon’s abdication. er.

During the 19th century, Cognac shipping experienced a real burst in growth. (Going from a little more than 36,000 hl In volume in 1799 to more than 478,000 hl in 1879).
The growth was erratic and while Cognac shipments took a plunge after the French Revolution, they reached new heights in 1807.
On the other hand, Napoleon’s continental blockade went hand-in hand with the collapse of Cognac sales as of 1808.

It would not be until 1860, with the signing of a free trade agreement between England and France, driven by Napoleon III, that Cognac sales would take off. By 1879 they had tripled, from less than 150,000 hl in 1860.

Beginning of shipping in bottles

In the middle of the 19th century, Cognac houses began to ship the spirit in bottles rather than casks, in order to promote their “brand”. 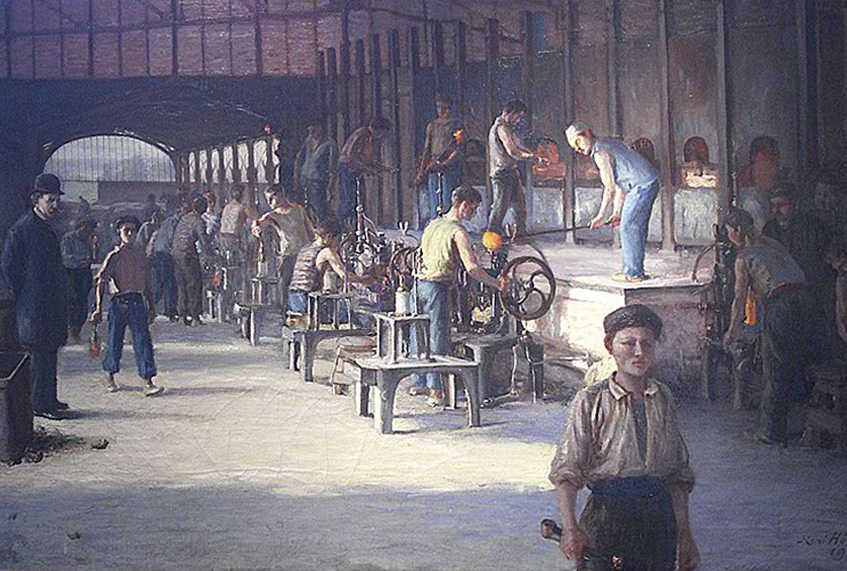 The phylloxera crisisEnd of the 19th century, phylloxera destroys the majority of the vineyards

Around 1875 phylloxera appears in the Cognac region. Phylloxera is an insect of the hemiptera family and one of its species, Phylloxera Vastatrix, attacks grapevines and sucks the sap from their roots. 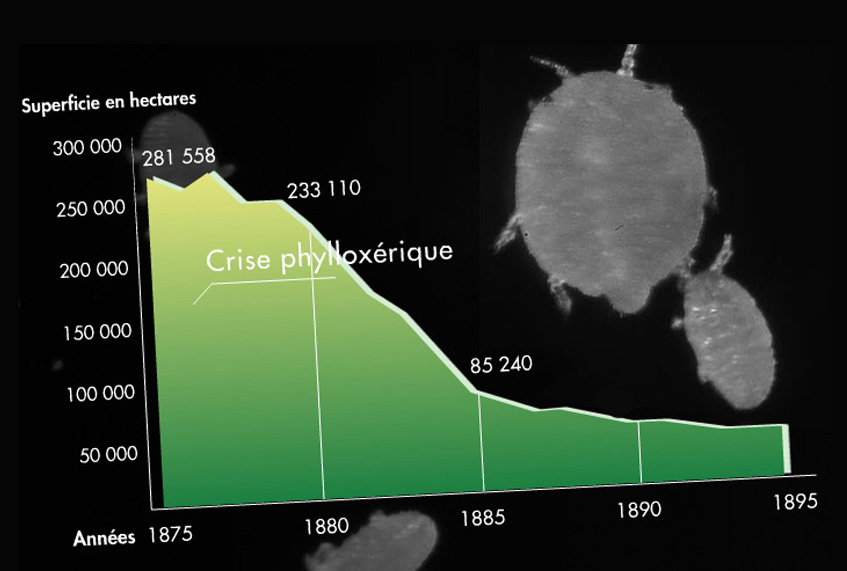 Birth of the first interprofessional initiative in Cognac: The Viticulture Committee in 1888

This tragedy gave birth to the Viticulture Committee in 1888, which would then become the Station Viticole in 1892.

In 1887, a French delegation led by Pierre Viala, Professor at the Montpellier School of Agriculture, was sent to the United States in search of phylloxera-resistant grapevines. 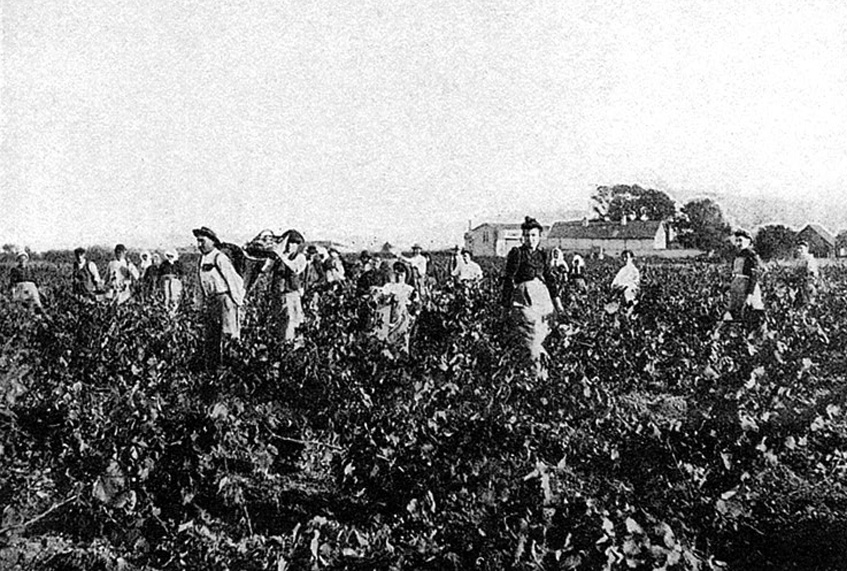 The delegation’s aim was to bring back seedlings on which to graft French varieties , to benefit from the American grapevines’ resistance to phylloxera, while retaining the quality produced by French varieties.

The first attempts were catastrophic. The first rootstocks brought over could not withstand the chalky soil of the region. New rootstocks resistant to chlorosis had to be found. It took many years of hard work and patience for the economy of the region to recover.

20th centuryReplanting of the vineyards with American rootstocks

Nietzsche said: “What doesn’t kill me, makes me stronger”. The vineyards were replanted with American rootstocks immune to phylloxera. Traditional varieties (Colombard, Folle Blanche, etc.) were weakened by the grafting process and were gradually replaced by the more resistant Ugni Blanc, now used for more than 98% of Cognac production. 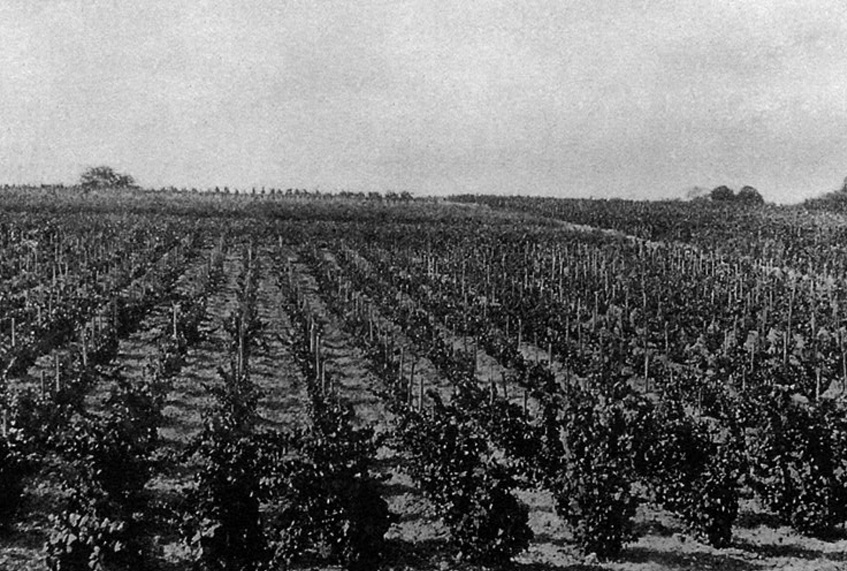 Establishment of Cognac legislation to preserve longstanding local use

Legislation to preserve longstanding local use is put in place :
• 1st May, 1909: Geographic production zone is delimited.
• As of 1936, Cognac is recognised as an “Appellation d’Origine Contrôlée” (Controlled Appellation of Origin).
• In 1938, regional Appellations (crus) are delimited. 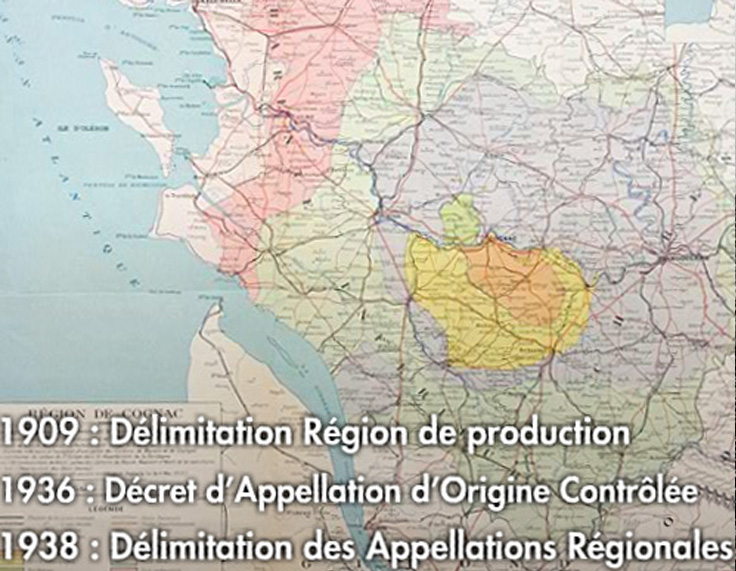 During World War II, the “Wine and Eaux-de-Vie Distribution Bureau” is created to protect Cognac stocks. With the liberation of France in 1946, this body was replaced by the Bureau National Interprofessionnel du Cognac, which joined together with the “Station Viticole” in 1948. All stages in Cognac production are henceforth subject to regulations aimed at establishing production rules and protecting this product of everincreasing fame.

21st centuryCognac is an international luxury product. More than 97% is exported

Historically an export product, 90% of Cognac is now shipped to foreign countries.

With a presence on every continent :Cognac is shipped to nearly 160 countries

From the Far East to the Americas by way of Europe, Cognac is synonymous with exceptional quality; it is a symbol of France and its art de vivre.